Farming is at the heart of all civilisation, marking the end of nomadism and the beginning of ordered societies. Even today, urban dwellers are fed by the literal fruits, vegetables and wheat-based products of farm labour. We look back at five times farming history was changed and how the agricultural industry was revolutionised for the better.

The plow gets a makeover

The humble plow has been helping farmers since the time of the Egyptians. They would use an iron-tipped, wooden plow pulled by oxen. Using a plow meant that the land could be tilled faster and allowed them to produce and yield more crops more efficiently. American pioneers in the 1800s used a similar plow that was made out of wood and iron, although it was much more difficult thanks to the density of the prairie soil. The blades would often get stuck and needed to be manually removed. The solution came unexpectedly when a blacksmith named John Deere used a steel saw blade instead of iron. The steel blades cut through the prairie easily, revolutionising farming and heralding the start of one of America’s most successful agricultural manufacturers today.

The invention of the tractor

Life before tractors was marked by immense physical toil for farmers, farm workers and their oxen, horses or mules. The industrial revolution drastically changed the farming landscape with the invention of the first self-propelled steam engine used to harvest wheat and pull gangplows in the 1870s. These machines eventually evolved into the modern tractor by the 1920s. In 1824, the Farmhall tractor became one of the first multi-functional machines used to pull harvesters and other planting equipment, finally allowing farmers to resign the huge, lumbering steam-powered models. Farmhall soon had to build 200 models a day to keep up with the demand. This invention meant that farmers could now work more land faster, with less labour, and also be able to produce better yields. However, the original Farmhalls had no batteries and needed to be started by tireless cranking until electric starters were installed in 1936.

The combine speeds up harvesting

Before the evolution of farming technology, farmers would have to manually harvest crops by cutting them with scythes and removing the seeds with their hands. Many hands were needed to separate grains from the crops even after using steam-powered threshers. In 1886, the first self-propelled combine was used to harvest 100 acres, a task that would have taken days. The first combine was just as large as those you see today, although modern combines have interchangeable heads to harvest crops including wheat, soy and rice. Today’s models also have a more advanced technological advantage with the addition of sensors that track the amount of grain exiting through the thresher, as well as GPS technology to record performance. Farmers can thank the combine for making harvesting more efficient and thus, producing greater yields much faster.

Farmers spend most of their lives on their farms, however, these were and are normally massive properties that require more than a brisk walk to get from field to barn and back again. Farmers relied on two-wheeled and then four-wheeled wagons for centuries to cart machinery, livestock, crops and other objects around the farm or to the market. The first motor truck appeared at the beginning of the 20th century and was used mainly in urban areas. The “Auto Wagon,” introduced in 1907, was the first of its kind – a hardy truck that could be used exclusively by farmers. The rest is history, with the modern pickup truck or bakkie taking its place as a farmer’s pride and joy, not to mention the most used piece of machinery.

The gift of simple yet solid rubber

Steel-lugged wheels caused untold misery for farmers. They were slow, shook bolts loose and dug stubbornly into the ground if they spun, causing damage to the roads. Florida orange growers were sick of the steel lugs damaging their tree roots and rightly concluded that rubber tyres would be the answer. In 1931, a tractor that had a rubber tyre mounted to the steel rim was brought out by BF Goodrich and Co. From then on, other companies followed suit. Rubber tyres were more powerful, more comfortable, much better for mileage and didn’t dig divots into the road – leaving farmers happy to drive their tractors.

The long history of farming has shown that as the world changes, it reflects in agriculture and impacts society, ensuring the world is fed and nurtured. Advanced farming equipment suited for the modern farmer is what Radium Engineering specialises in. Peruse the products page for any farming needs you may have.

Farm equipment and crops needed to make your own livestock feed 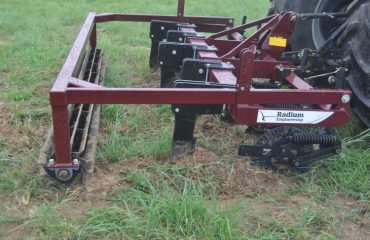