2016 in Agriculture: Looking back at the best and worst

2016 in Agriculture: Looking back at the best and worst

This year has seen real highs and real lows in the industry. While the agricultural industry has been under severe strain following two successive droughts in both 2015 and 2016, seeing the catastrophic damage to livestock and crops, there has been unprecedented support by the government and private sector to curb the masses losses faced by the farming sector as well as technology created to improve the farming conditions.

2016 has seen the worst drought in South Africa in more than a century. Using state-of-the-art observation technologies, the Council for Scientific and Industrial Research (CSIR) has revealed the extent and severity of the drought. They used remote sensing technologies, a method which reveals vegetation greenness on an index, which in turn says something about the drought in areas.

The CSIR said South Africa has been severely affected by the El Niño-induced drought, which has placed a strain on water supplies and agricultural production across the country.

This has had a dramatic impact on the farming sector crippling livestock and crop farmers around the country. This, in turn, has had a ripple effect in which the production and produce were negatively affected leading to an 11.6% increase in food prices in August this year. Crops have been under threat as well as rain reserves, which could be calamitous for our R104 billion export industry.

Because of the lack of rainfall in 2016, South Africa has had to become a net importer of maize in the 2016/2017 fiscal year with imports expected to exceed around two million tons. White corn, used to make the staple pap, has also declined by 36% this year. Traditionally, South Africa is the largest corn producer on the African continent.

Positivity in the agricultural sector

While the drought has had a ghastly effect on the lives of farmers, consumers and the economy, it has seen the private and governmental sectors both locally and internationally pull together in an attempt to salvage the conditions that the drought has put farmers in.

The government has already spent around R268 million on drought relief, while provinces have made R173 million available to help farmers with animal feed and stock, with an additional R198 million to help smallholder farmers with feed and watering facilities.

Farmers have also been thrown lifelines by privately funded programs including one such venture undertook by the National Agricultural Marketing Council named the Custom Feeding Program, will assist farmers who are unable to feed their livestock. The Custom Feeding Program has already invested R6 Million to assist farmers in the North-West province.

Despite the bad agricultural news that has swept the country along with the drought, there has been good news as well such as macadamia nuts and avocados growth in South Africa are in line to be exported to the United States and China.

Avocados and macadamia nuts could hit the shelves of supermarkets in both the United States and China as growers seek to expand their growth abroad as the growth on the African content is set to limit itself with all of the economic strife that has plagued the continent.

Commercial farmers in South Africa also intend on increasing the area planted with maize by 26.5% to 2.46-million hectares‚ in the 2017 planting season.

Technology in the Agricultural sector

The Africa Soil Information Service is developing digital soil maps for sub-Saharan Africa which will give farmers information such as new analysis, statistics and field trials which are key to planning crops and sustaining them for years to come.

In a drone competition this year, it was once again shown how useful they can be to farming. These multi-copter and fixed wing models will allow the farmer to fertilize crops, evaluate crop and look after crops for efficiently.

Scientific advances also allow for crop genes to be altered and made to be drought resistance, this science is still in its testing phase, but popular results have already been seen revealed.

Cut across your pastures with ease using rotary cutters 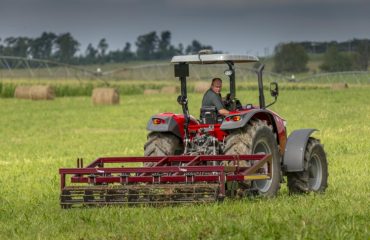 Why any kind of farm will benefit from these three Radium Engineering products.